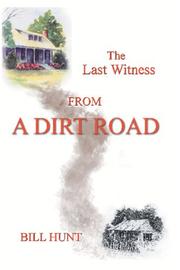 The Last Witness From a Dirt Road by Bill Hunt

Directed by Piotr Szkopiak. With Alex Pettyfer, Robert Wieckiewicz, Talulah Riley, Michael Gambon. An ambitious young journalist uncovers the horrific slaughter of twenty-two thousand Polish officers during World War II. A secret that has been kept hidden for far too many years. Oscars Best Picture Winners Best Picture Winners Golden Globes Emmys San Diego Comic Con New York Comic Con Sundance Toronto Int'l Film Festival Awards Central Festival Central All Events.   Her works include The Unwomanly Face of War (), Last Witnesses (), Zinky Boys (), Voices from Chernobyl (), and Secondhand Time (). She has won many international awards, including the Nobel Prize in Literature “for her polyphonic writings, a monument to suffering and courage in our time.”Reviews:   The Last Witness tells an important story that needs to be told and know but ultimately is a lackluster film that feels like it drags on even at its 1 hour and 33 minutes runtime%(6).

THE LAST WITNESS FROM A DIRT ROAD. GET WEEKLY BOOK RECOMMENDATIONS: Email Address Subscribe Although Hunt was well aware that the world beyond the dirt road was all-white—including his school and church—he was genuinely bewildered by warnings that his friendship with Papa could eventually pose a risk to both of them. The author.   • Last Witnesses: Unchildlike Stories by Svetlana Alexievich, translated by Richard Pevear and Larissa Volokhonsky, is published by Penguin (£). To order a copy go to Looking for books by Bill Hunt? See all books authored by Bill Hunt, including Search Engine Marketing, Inc.: Driving Search Traffic to Your Company's Web Site, and The Last Witness From a Dirt Road, and more on   “The Last Witness” by Glenn Meade, published by Howard Books. Category – Mystery/Thriller Publication Date – Aug Although this book is not Historical Fiction, it does give insight to the breakup of Yugoslavia into the countries of Croatia, Serbia, and Bosnia. These countries have a history that goes back centuries that contain a hatred based on religion and ethnicity/5(76).